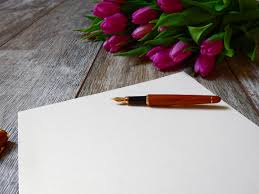 At ten, I didn’t realize my fierce letter-writing efforts with my pen-pal would contribute to my path to becoming a novelist.  Back then, Eisenhower graced an eight-cent stamp, and all I cared about was spraying the right scent on the floral pages I labored over.

The letters spanned close to thirteen years of correspondence. We wrote about the boys we liked, and the ones who broke our hearts. We gossiped about the goings-on of singers and groups like the Silvers and the Jackson 5, contemplating who we thought was the cutest.

As I grew into a young woman, the letters became infrequent, while my life’s journey took center stage.  I’d found it difficult to focus on the type of writing I wanted to achieve, mostly dabbling in poetry and article writing while still maintaining a journal.

By the time the letters stopped, I attended college and pursued writing. My first published article appeared in Essence magazine. But, did those pen-pal letters help? What did it all mean for my writing future?

Today, I am a published writer, happily writing novels. I love the labor of shaping a story into something my characters tread through.  One day, though, I plan to write a book about my pen-pal and the letters we so eagerly wrote ending them with a phrase that went something like this:

Check out my books! Go to: http://www.pamelatowns.net