THE BUZZ ABOUT MOMENT OF CERTAINTY 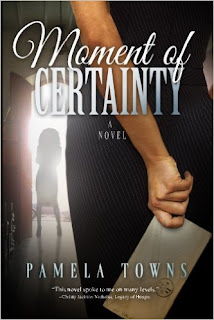 Moment of Certainty by Pamela Towns is a journey to a moment of clarity and deep understanding for the main characters, Karen and Val Williams, in this Detroit story. But the real joy of this novel are the characters that the two women meet along the way: Momma, the keeper of Val's dark secret; senior residents of Golden Walk Nursing Home, Ms. Blout and Mr. Hamilton; Hershel, Karen's heart's desire; Jessica, a friend that becomes a rival; and the mystery man Frank who has a devastating effect on Karen and Val. Their journey on the road of life is sometimes rocky but also illuminating. If you're a reader looking for a debut novel with passion and drama, look no further.
Terry W. Benjamin author Sexy@60: Finding PEACE and The ABC's of SUCCESS: Information for Transformation

By Christy Nicholas
I truly enjoyed this story, and it resonated with me on many levels, not the least of which it was set in a city I lived in as a child. Many of the aspects of the main character's life also mirrored my own experiences, though she had much more difficult hurdles to overcome. I was truly enamored of her well-developed relationship with her patient, and the consequences of that relationship. Ms. Towns has written an intriguing tale of the heartaches and joys of inner-city living, and a strong-willed heroine.


By M. Penn
Moment of is a great read. You'll laugh and cry along with Karen and Val as they courageously redefine their sisterhood. Pamela Towns is entertainment at it's finest. A must read for anyone who has ever grappled with .

Posted by Pamela Towns at 9:37 PM No comments: